Part 11 begins with…WAVING FROM THE DOCK 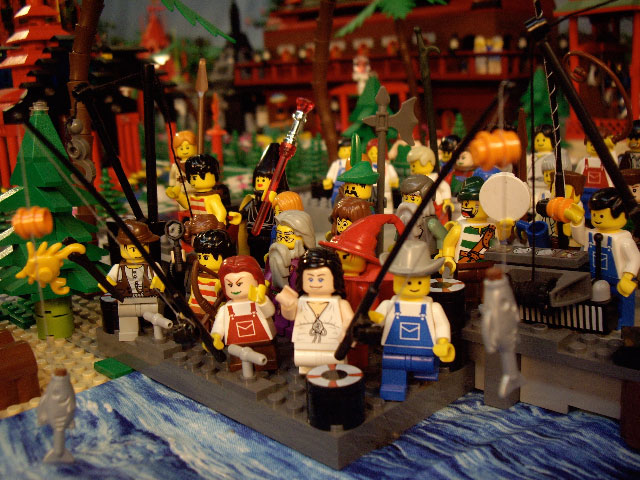 The Get Village gathers “In Plenum” on the Get dock, waving to the Regent and the departing trade ship.

The  full Village is out on the Get dock to wave goodbye to the departing ship. They are glad to see it, the Regent, his solders and his entourage go.

Usually all the Get “outsiders” would be on that ship and the village could have some time to quiet down before the Settling ceremonies begin. But with the Order delegation, government solders, geologists, photographer and her assistant are still in the village, the villagers won’t get their village settled until the ship comes back one more time and takes most of them away. 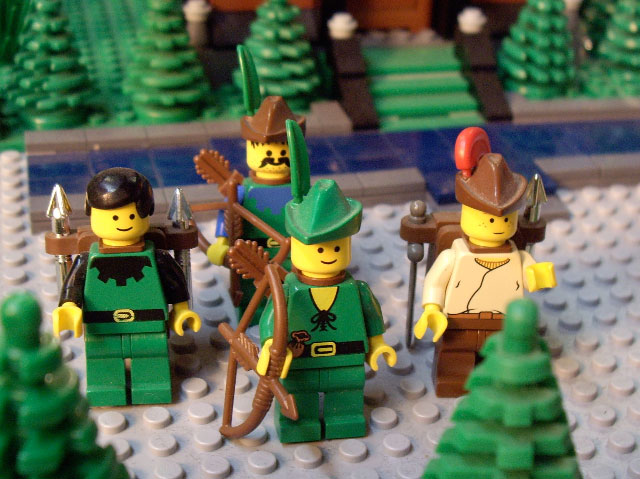 The Get woodsmen have returned for the long trek through the Zom jungle for the Goddess Temple.

Dusty, dirty, and still wearing their travel packs from their long trek, Jonarue and the other Get Woodsmen just finished escorting the male members of the “Order” delegation back through the jungle from their visit to the Dragon Riders Goddess Temple. They have made it back just in time to watch the trade ship depart. 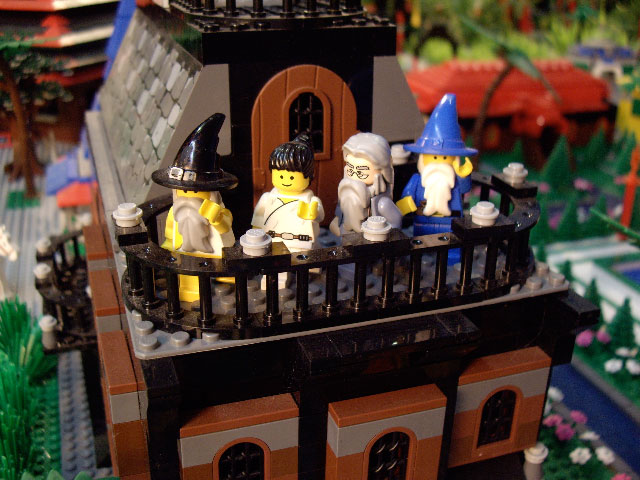 Having just returned from the Dragon Riders Goddess Temple, the visiting Magus and Wizards from “The Order”  wave goodbye to the ship’s passengers from atop the third story balcony of the mansion.

They were hoping to be able to get a ride back to Port Atune on this ship, but there was just not enough room.

The witches and the wise woman from the order’s delegation have elected to remain at the Goddess Temple for the duration of the winter raining season, called the settling, to study with the dragons and their riders.

Now that the Regent and his entourage has moved out of the mansion, the male delegation from the Order has moved in until the last ship arrives to pick them up.

If the ship makes it back to Get before the rains start, then the order delegation will get a ride home and will not have to spend an extra two months in Get during the settling season. 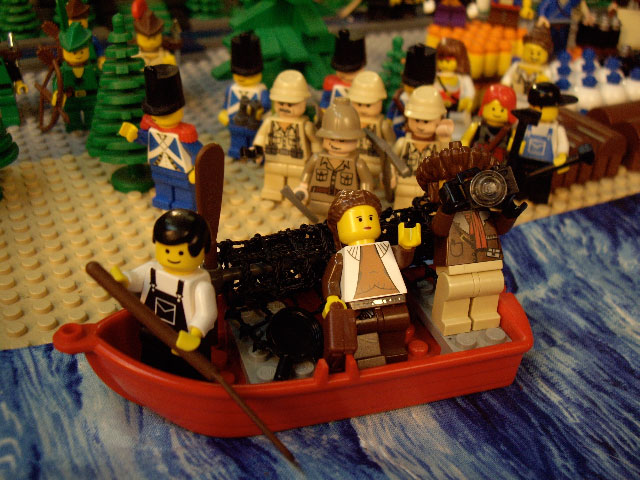 The photographer and her assistant stand in a fishing dory to shoot pictures of the boat that they wish they were on.

The regent brought the photographer and her assistant with him to record the trip on film. He placed them in a fishing dory to shoot pictures of his departure. This meant that the trade ship is leaving them behind as they shoot the regent waving good by from the poop deck of the ship. In order to get back to Port Artune, they will have to wait for the trade ship to return to Get one last time.

THE GEOLOGIST AND THE SMITHIES 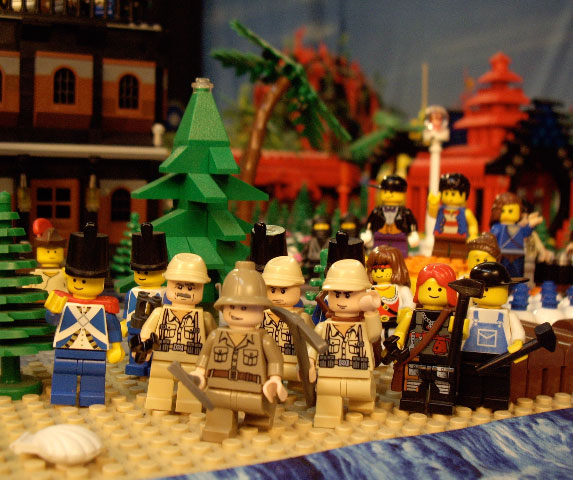 The solders, geologists and the smithies, ( Sara and Jedidia), standing next to each other on the Zom river shore.

If the Order delegation leaves on what is saposed to be the last boat to Port Atune, the Geologists will be able to move into the Mansion for the rainy season.

The geologists are hoping that the ship is able to return to Get in time to take the Order elders away before the settling starts. Otherwise the geologists will have to spend the rainy season in the little privet bunk rooms at the Hogsmead Inn, while the Order delegation spends the wet tropical winter in the nice big mansion.

With the Get woodsmen now acting as the guides and protectors of the geologists for the rest of their volcano investigation, the solders are now relieved of duty and will hopefully get to go back to the Port Atune fort on the returning trade ship’s last trip down the river before the settling begins.

At first, the solders were hoping the ship would not make it back before the the settling rains made it impossible for the ship to come up river to retrieve them. If that seanarieo would happen, then they thought they could spend the wet winter in Get courting all the beautiful single women.

But now they have all changed their minds, since they quickly found out that the independently minded girls of Get were as strong or stronger than any of them in many ways, and certainly a lot smarter. They now eagerly await the return of the ship to take them back to civilization and more “Gentile” women .

Standing next to the geologists, waving to the departing ship are Sara and Jedidia. They are excited about the coming Settling.  Sara and Jedidia will be moving into their newly built home atop the Mill-Forge and firing up their new industrial sized forge for the first time. They have big plans for the new town of Get.

Jedidia has been the mayor of Get for two full turns and it is time to pass the responsibility on to some one else on the village council. Jedidia instigated and over saw the council’s logistical plans for clearing the rest of Get valley of jungle and moving the agricultural fields, horse pasture and farmers huts over to the other side of the East river. He and Sara also worked on the design and layout of new farming and fishing village.  Now with those plans finished, and once the move is compleate, Jedidia’s smithy expertise will be needed to help build the village into a town.

Jedidia’s duties as mayor will be handed over to Mrs. Brendan, the leather smith’s wife, during the coming Settling ceremonies.

She will oversee the transformation of the Get village into a town. Although civilizing the whole Get valley doubles the size of Get, knowing that this will be all the land that Uths and his junior dragons will hand over to Get from their realm, she and the new council, will have to carefully plan how to expand their new town of Get into the vacated fields of the West Get valley.

With Jedidia soon to be relived of the duties of Mayor, Sara and Jedidia can work together again as the village smithies and start raising a family. Considering that the Mill-Forge is almost geographically out side the village in the Zom jungle and situated deeper into the dragon’s realm that any other Get home, it is a safe bet that they will have at least twins, if not triplets. 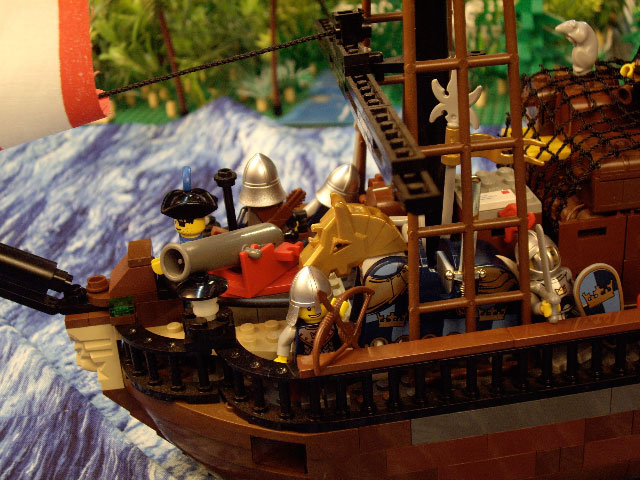 The Regent’s horse rides top side.

The Village usually sends 3 or 4 horses down the river every boat trip, but there is no room for them on this trip. The usual shipment of horses will also await the return of the trade ship along with the rest of the non perishable goods at the dock.

There is no room in the ships hold for the kings horse, so it has been placed near the front of the ship with hardly any room to move. One solder has been designated to clean up after him.

Hopefully they wont have to use the cannon against the hostels on the way down river or there will be trouble with the kings horse and a lot more poop to clean up.

RENALDO AND THE SHIP RATS 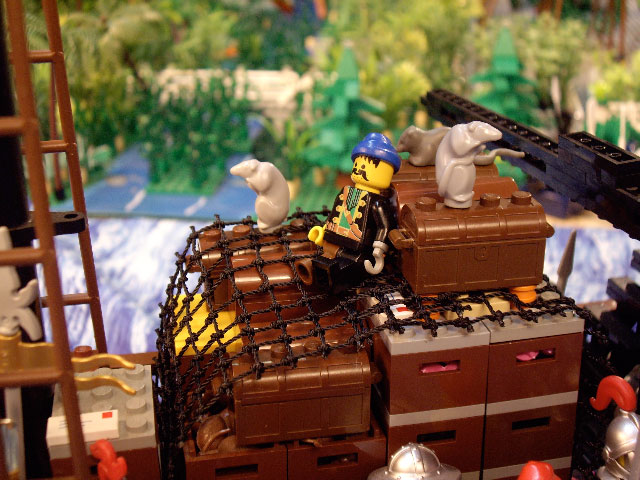 Renaldo rides atop of the cargo with the ship rats.

There is not even room in the hold for the ship rats, so they have joined Renaldo, the captain’s loyal friend and ships cook from the “old days”, as he sits on the cargo crates piled high on top of the ship’s hatches.

LOADED TO THE GILLS 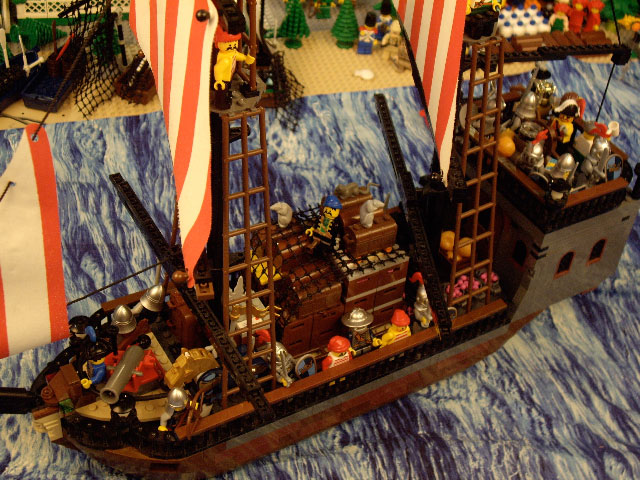 The Get village people would like the ship to arrive back at the Get dock before the Settling, not just so they can get the rest of their harvest to the market in Artune, but because they also want the ship to take all the outsider visitors away. Then, after all of the extra activity that has been going on in Get, the villagers can have their traditionally wet, but quiet settling.

The photographer and her assistant, the solders and geologists, the members of the Order and people of Get village will all get their wish.