Part 10 begins with THE UP RIVER NATIVES 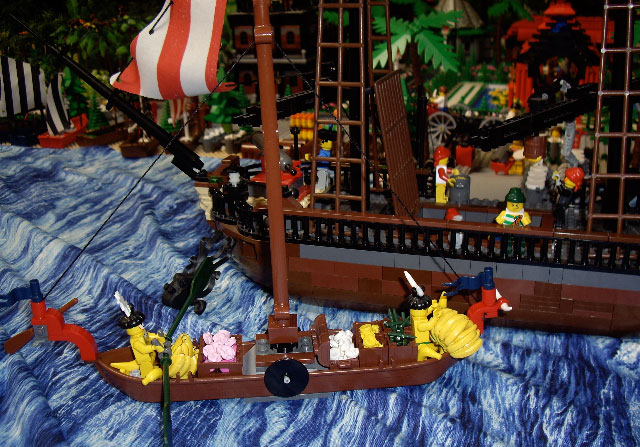 The up river natives trading jungle fruit and bananas.

When ever the trade ship is at the Get docks, the up river natives fill their canoes with jungle fruit and bananas and trade with the ships crew.

Once unfriendly and dangerous, the up river Natives were befriended by Get the founder. Get grew things in abundance that they could only gather, so he was the first to trade with them.

Although the up river natives live near the dragons realm, until Get established the village, they never ventured up the river to the falls. They feared the Dragon and the native Invisibals who live in his realm.

Unknowingly the Invisibals have also had the protection of Uths the dragon as well. 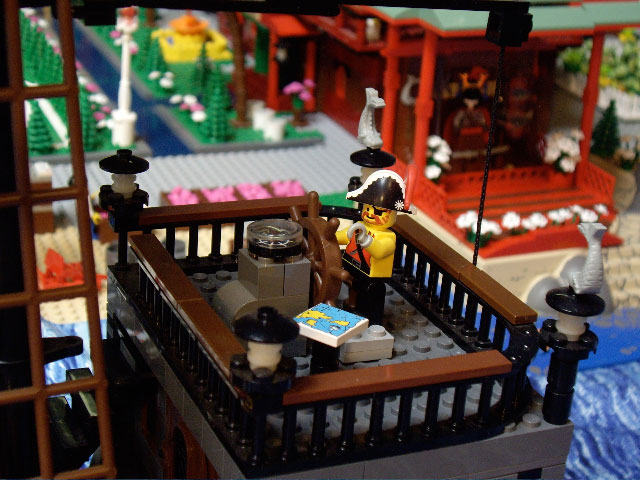 Captain Harrrken on his trade ship

In this picture, Captain Harrrken is holding the ship steady by directing the rudder against the rushing current.

Yes his name is spelled with three Rs, as in the old pirate saying, “Arrrg”

The Trade ship is strongly moored to the dock, but the dock is so close to the Escarpment falls that the fluctuating current easily could tear the large deep water ship from its moorings unless some one is manning the ship’s Steering wheel at all times.

Although the captain lost his hand in a sword fight, the man who cut it off, lost his head moments later. Such is the life of the rolling sea.

Captain Harrken is an ex-pirate. He is not a man to be trifled with and takes no nonsense, but he is fare and gentle when delt with with respect. He is considered a great ships captain and is well known as a greater pirate. Every one who wanted a little danger along with his pirate adventure and the extra rewards that would come along with it, would want to sign on to Captain Harrrken’s Ship.

Captain Harrrken was one of the most successful pirates of his time. In the middle of his successful career, he retired and and disappeared. He took all of the loot that he had collected over the years and, according to seniority, split it up amongst his crew.

Each of his loyal crew could now afford to buy their own island, ship or both.

Only a few of his crew “Retired” with their wealth like their Captain. Most pirates are pirates for the life of adventure on the high seas more than for the spoils.

He handed his secret island hide-out over to his crew. They made themselves governors of the island and turned it into what is known today as Pirates Landing. Pirates Landing is now known to the whole pirate community as a safe place for rest, recreation, recuperation and booty trading.

Captain Harrrken took his share of the loot, bought a house at Port Atune, as well as a cargo schooner and started the trading route up and down the Zom river. He did not have to change his appearance, as a one eyed, one handed, peg legged sailor is a normal site to see in the south seas.

Why the sudden change of job description?

Yes, it was a girl in Port Atune who stole the pirate’s heart and asked him to settle down. So he did.

It is as simple as that. Captain Harrrken had his day on the high seas, and is now content to be well settled with his love at the river mouth, happy with his lot in life as a trade boat captain. He named the cargo schooner Kissenkaty.

Katy is his girl

You “CAN” teach an old dog new tricks 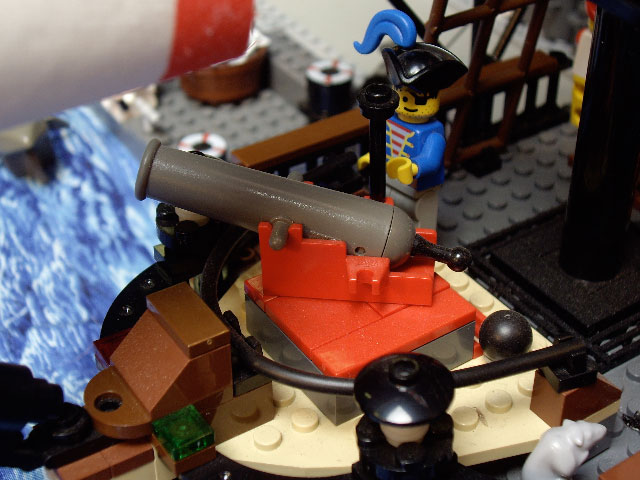 The caption’s first mate is named Clive. He was also Captain Harrrken’s first mate for many years on his pirate ship and because of that, he is a very rich man. When Clive heard that the caption was running a cargo schooner up and down the Zom river as a trade ship, he sought the caption out and signed on. He didn’t come for the money.

On the trip uo and down the river Zom, Clive stands next to the ship’s only cannon. It is always primed, at the ready and sees action regularly.

There are still four areas on the Zom river where hostile natives still reside. They attack passing boats and try to capture hostages for ransom. Some of them just try to stop the ships and charge the passengers a tax for using their part of the river.

Going against the Zom river’s currents while moving up the river, a schooner trade ship full of cargo is an easy target for the hostels fast canoes, so the ship’s cannon is used on a regular bases in the ships defense.

As part of his business overhead, the caption has to figure the price of four or five cannon balls per trip. They are shot at or over the heads of the hostels to keep them at bay.

On the ship’s trip down the river as it heads back to Port Artune, the Zom’s fast running currents pushes the ship from behind, giving it extra speed. That makes it harder for the hostels to catch up to the trade boat to do any harm, so Clive rarly has to fire the cannon on the downward trip. 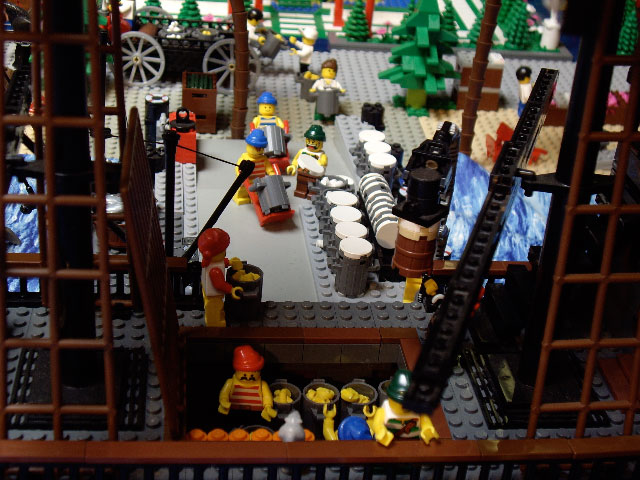 In this picture, boxes of plums and river weed can be seen stacked up next to the dock, while containers of lemons are being unloaded form the harvest wagon and loaded into the ships hold. Canisters of sword bush healing ointment can also be seen in the ship’s hold, but they will be taken off the ship and stacked up on the dock because the crew has figured out that the ship will only hold the perishable harvest goods before it will be fully packed.

Also sitting on the dock are canisters of cotton. A non perishable commodity, the cotton may not fit on the ship and like the Canisters of sword bush ointment, they may have to wait until the trade ship’s return in a few weeks. 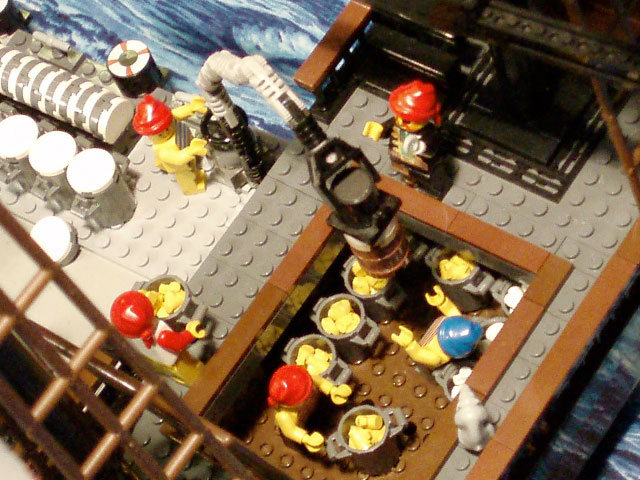 Once the village gets it’s goods to the dock, the Trade ship’s deck hands and the village’s fishing fleet sailors load the ship with the dock winch.

Harvest time turns the very independent Get Villagers into a collaborative commune. All the craft people close up their shops and join the farmers in the fields and the woodsmen come out of the jungle to help harvest the village crops. The fishermen and crab grabbers leave their boats on the shore of the Zom River to help load the harvest and trade goods onto the trade ship.

What was supposed to be the finale trade ship harvest pick up of the year, is now leaving for the trip down river. Because the Regent, his entourage and his new horse are on this ship, one third of the village of Get’s last harvest sits on the dock awaiting the ship to reach Port Atune, unload and return. The ship is packed to the gills with the perishable part of the harvest, while the non perishable trade goods such as hides, leather goods, sword bush ointment, palm oil, cotton, and coconuts wait near the dock for the ship to return to reload.

The trade ship will unload it’s cargo at Port Atune and immediately work it’s way back up the river to Get. Hopefully it will reach the village dock before the winter rains start and the river swells beyond the Caption’s capacity to navigate his ship up river against the rushing waters.

GOODBY FROM THE DOC 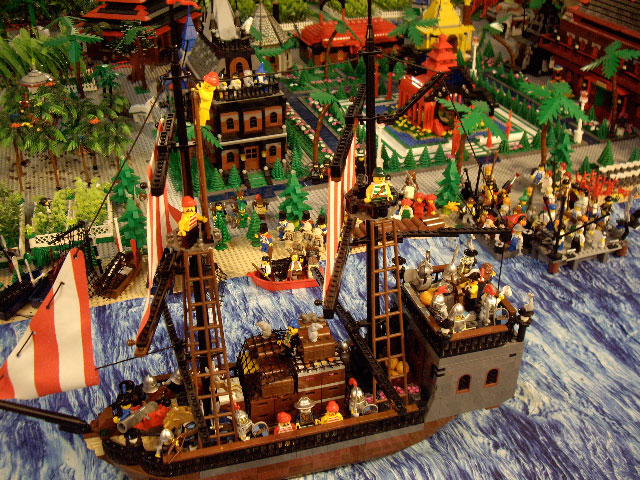 The village gathers to see the trade ship depart.

It is a tradition that since the whole village population works together to do their harvest and to load the ship, it gathers together on the Get dock to see the ship depart for Port Artune. 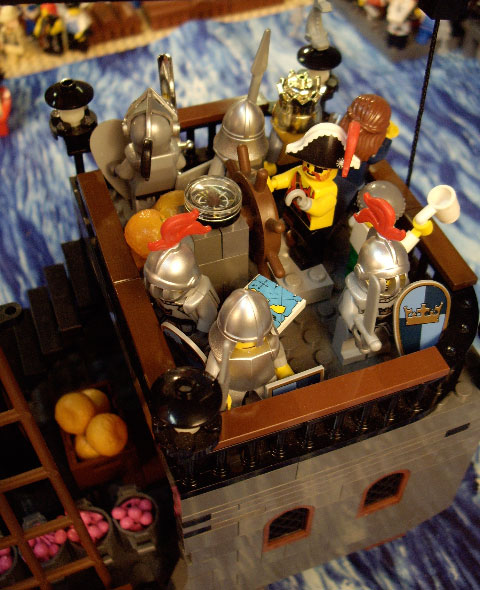 In this picture you can see the Get melons and cherries that have been gifted to the ships passengers and crew for their consumption on the journey.

The Regent, his mistress and some of his solders are crowded on the poop deck to wave to the Get villagers on the dock. 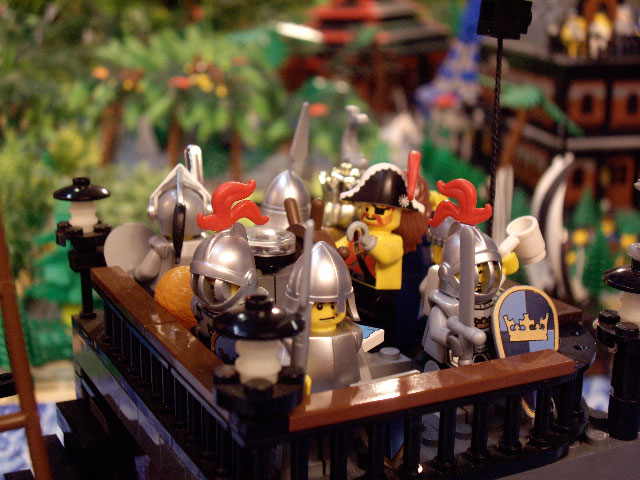 The caption endures the crowed poop deck for the traditional departure.

Under the condition that after their farewell waving, they will all get off and stay off the poop deck after the departure, ( except the regent of course ), Captain Harrrken has handed over his cabin quarters to the regent and his entourage for the duration of the trip. That way the caption and first mate will be able to bunk on the poop deck with relative peace and quiet during the crowded trip down the river to Port Artune.