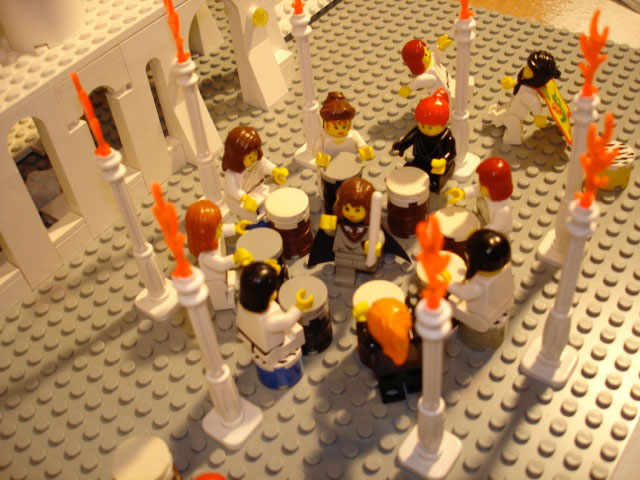 Did I mention that I liked drum circles? This is a simple sketch of the drum circle on the recreation grounds just outside the ground floor living area of the temple. 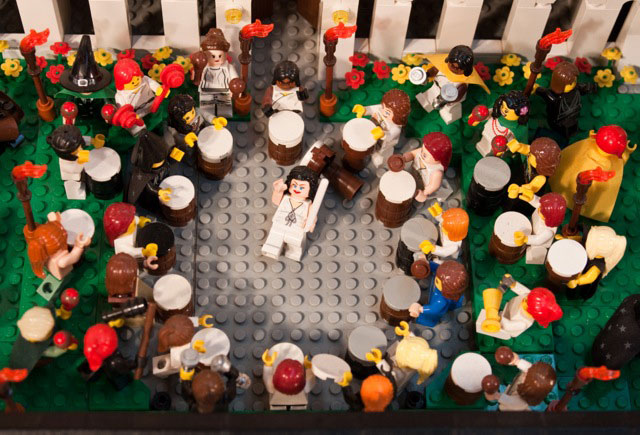 Here is the finished drum circle. 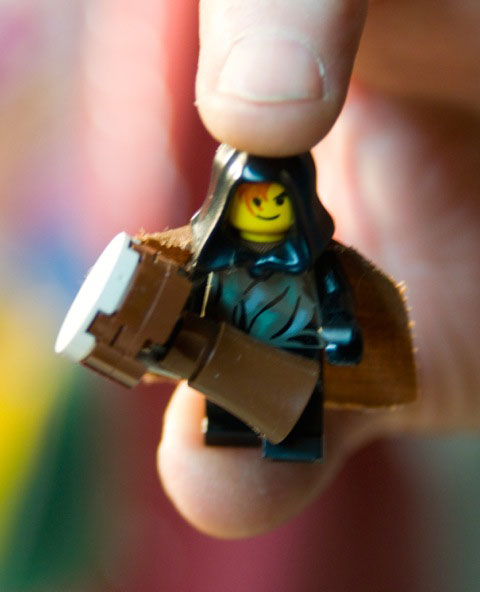 The drum circle even had Djembe players. 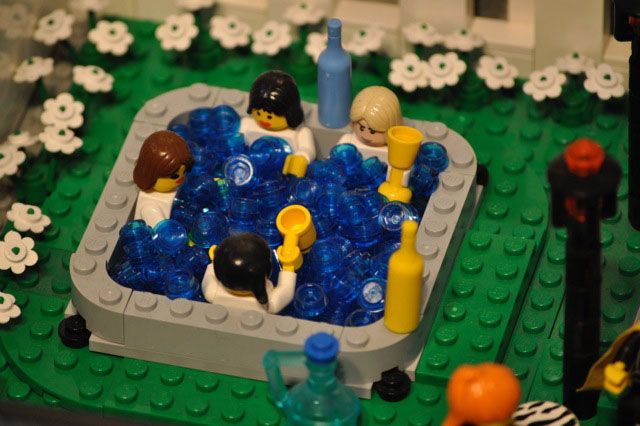 There was also a hot tub in the recreation area.
(please don’t ogle at the young ladies) 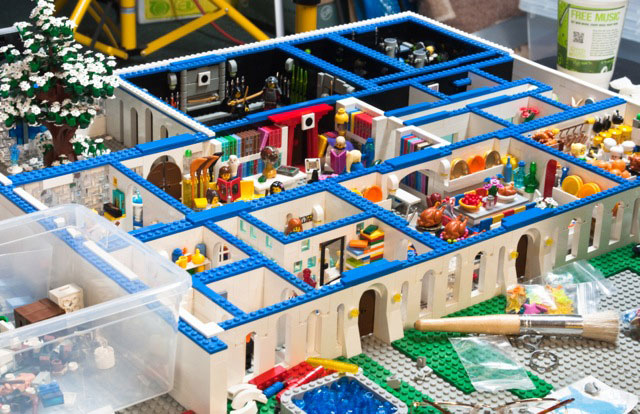 At ground level, under the floor of the alter and alchemy rooms, there is a living area for the Goddess Temple witches, warriors, dragon riders and initiates.

The living area includes a recreation room with a pool table, library, kitchen, dining area, the witches and dragon rider’s bedrooms, the docents’ bunk room, bathrooms and shower rooms. There is also a sauna, a massage room and a martial arts Dojo complete with a Japanese style “Onsen” soaking tub room and the female Buduko Warriors sleeping quarters & weapon room.

What more could a girl want?

The full Goddess Temple will be revealed to you in detail when we visit the completed Dragon’s Lair diorama that will be soon on this website.

So as her interest changed from doll houses to boys, I continued to develop the temple and the story that went with it that went way beyond the original intention of the LEGO build. The goddess dragon riders just may show up in a story book one day. 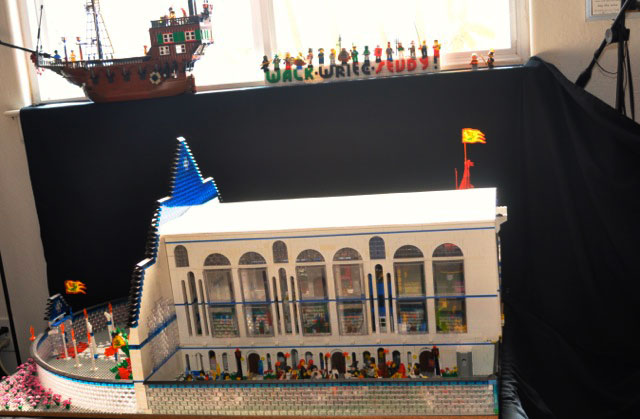 After the temple sat in my LEGO room for a few years collecting dust, I decided that it needed an appropriate home. I envisioned building a large enough LEGO diorama setting to be able to appropriately place the temple in its physical context.

Since the Temple was a Goddess Dragon Rider’s temple, it needed to be in a valley next to a volcanic mountain that held a Dragon’s lair. The valley needed to have ancient Aztec type temple ruins nearby where the aboriginal natives lived, (Part of the storyline ).

The scale of the combination of the dragon’s lair mountain, plus the Goddess Temple, plus the valley that housed the Aztec temple complex, meant that the LEGO diorama build would take up more floor space than a good sized bedroom. 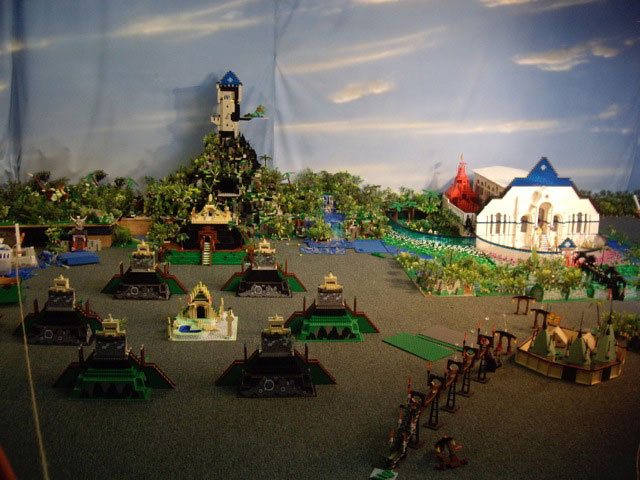 Luckily, I had a loft available in my drum company’s warehouse where I could build the temple diorama that, when completed, would be about 20 feet wide by 25 feet long. I also happened to have an eight foot tall, air brushed “sky canvas” that could be used as a background for the build.

There was only one problem. The jungle.

To buy and build an “all LEGO jungle” covering that much square area, ( palm trees $10 each, bushes, flowers, pine and fruit trees plus LEGO build trees), would have cost me more than the price of a high end BMW car. That was not in my LEGO budget.

The solution was to purchase artificial foliage from different sources and modify them to “LEGO scale” so they could fit onto the LEGO base plates.

So I decided to:

#1. Buy a bunch of plastic plants from a hobby shop. Cut them into smaller LEGO scale sizes, then stick them on LEGO antennas. I placed them on a LEGO base plate and I got LEGO sized trees for pennies instead of dollars. 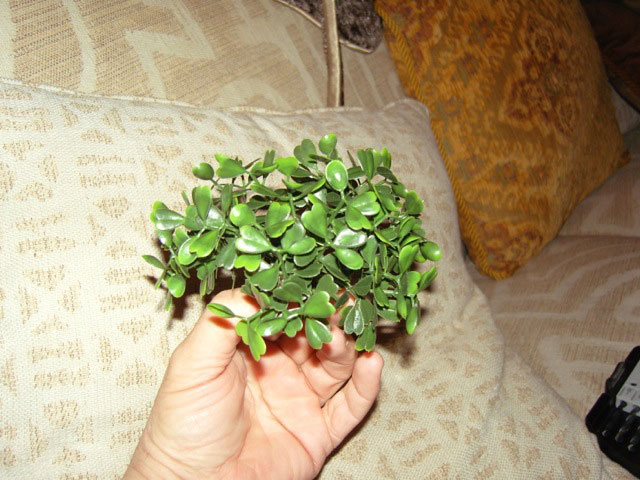 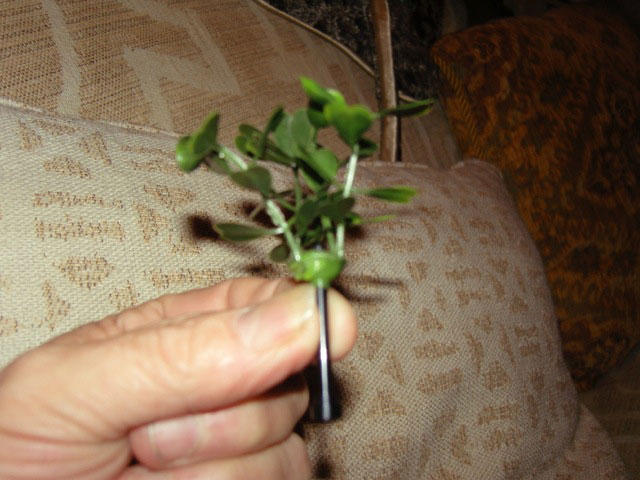 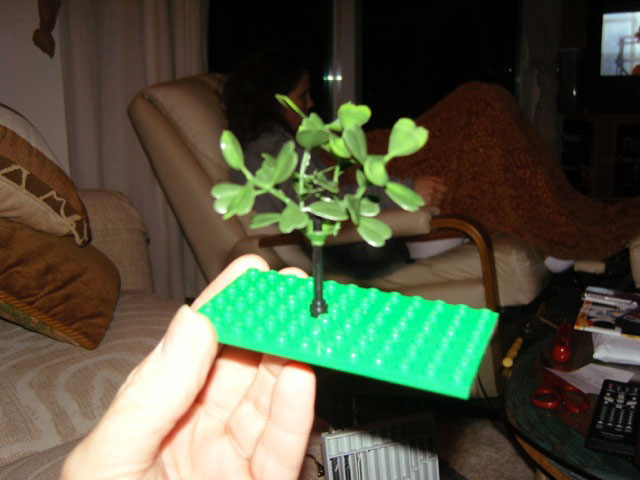 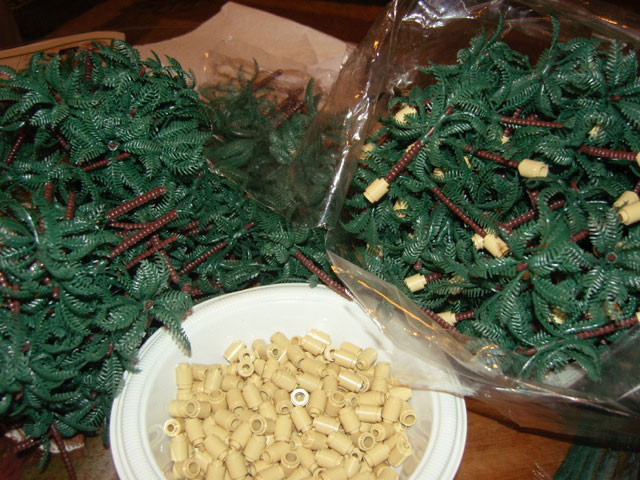 #2. I also went onto the “Inter-Web”, and purchased different sized palm trees used for cake decoration from a confectionery supply company. I then hot glued them into round 1 by 1 LEGO “barrels” and attached them onto the LEGO base plates. 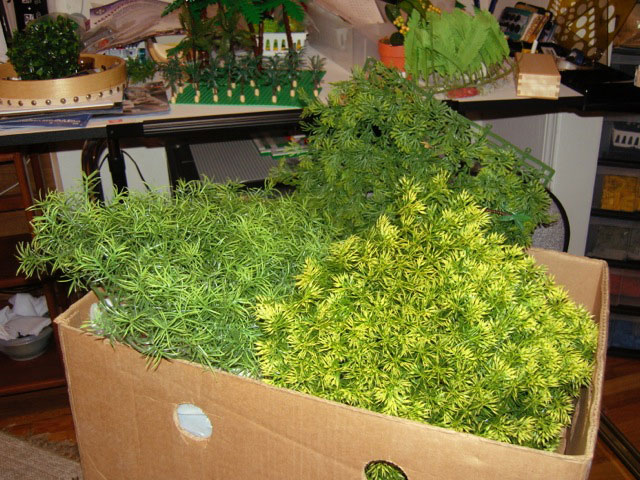 #3. I went to a local pet shop and bought a bunch of different plastic aquarium plants that I then hot glued onto LEGO barrels. In this picture you can see the different LEGO scale confectionary palm trees sitting on a base plate on the desk behind the cardboard box.

After several hot gluing sessions, I ended up with… 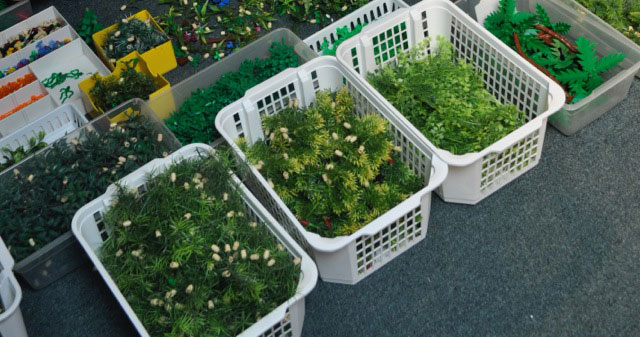