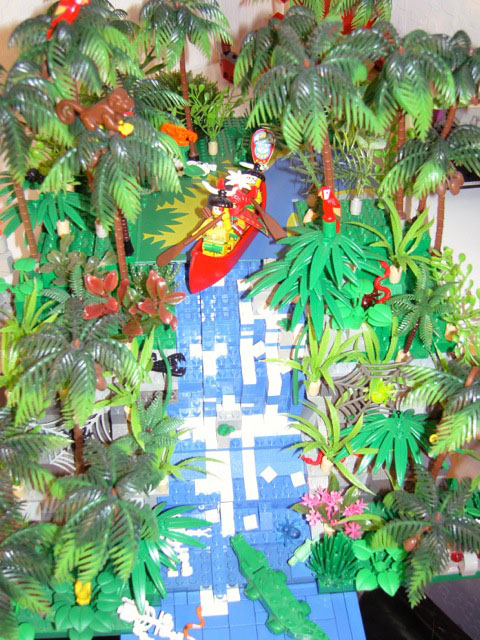 Above, you are looking at a waterfall jungle sketch.

Once I made enough LEGO scale jungle elements, I started to experiment with different combinations of plants, including real LEGO trees, bushes and “LEGO Build Trees,” to make a many layered jungle canopy. Then I added LEGO monkeys, parrots, snakes, frogs, spiders, scorpions and crocodiles into the jungle mix. 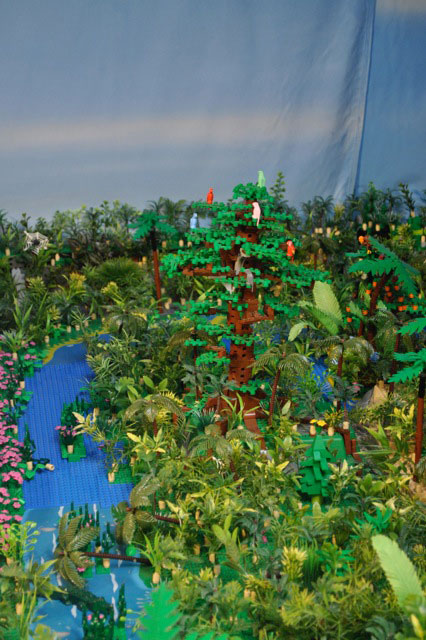 When I got the jungle canopy mix just right, I started integrating the jungle into LEGO geography such as rivers, water falls, hills and mountains. In the center of the picture above is a “LEGO Build” tree with parrots sitting in its branches. 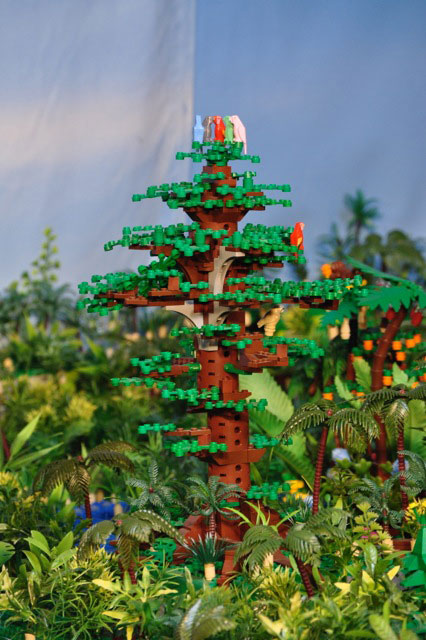 The “LEGO Build” tree that dominates this picture is called a Grandfather Tree.

The Grandfather Trees towers above all the other trees in this five layered jungle canopy. The parrots like to stay in them because, for some reason, the poisonous spiders that abound in this jungle don’t inhabit Grandfather Trees.

Given the total cost of the LEGO parts that made up this one Grandfather tree, around $34, you can see that trying to make a jungle with all LEGO parts would be financially impossible for me.

I was satisfied with the look of the mix of  “official” LEGO jungle parts and the LEGO scale hobby jungle parts that constituted the” mixed-media jungle canopy mix. Although the diorama could not be entered into a official LEGO convention because of the use of non-LEGO parts, it has a realism that works with the large dimension of the diorama. 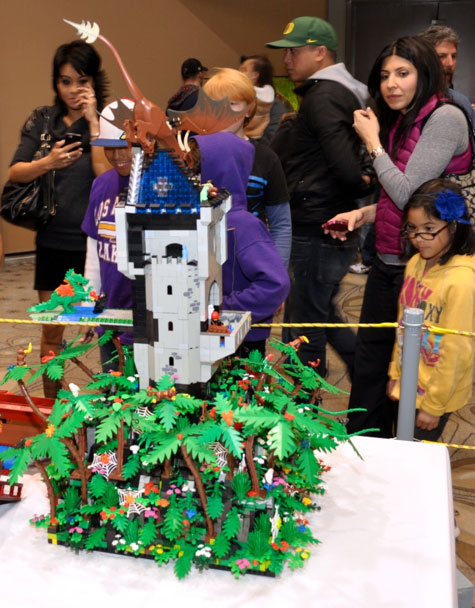 I did eventually show the castle at the top of the Dragon’s Lair Mountain at a LEGO convention. But as you can see, I replaced the original Mixed-Media Jungle with all “official” LEGO Jungle pieces in order to display it. Although the all LEGO Jungle looks nice, when comparing it to the picture of the mixed-media jungle, I prefer the diversity of color, plant type and sizes that the mixed-media Jungle has to offer.

I had developed sections of jungle that would go well with the temple diorama. But after of over a year of building jungle parts while sitting in front of the TV, cutting and hot gluing the parts together, I still only had about 1/2 of the jungle I needed to construct a complete 20 foot wide by 25 foot long jungle diorama.

So making enough LEGO scale jungle to build the LEGO Dragon’s Lair Valley diorama was going to take another year of my having to cut and glue together jungle parts with 1 by 1 LEGO barrels.

By the time I had made that realization, I wanted to take a break and, “Just Build Something!”  “Anything!”

Then I remembered the Goddess Temple story line.

To get to the Goddess Temple you had to start at the old pirate city called Port Artune. The seaport was situated on a largely unexplored continent and near the mouth of the mighty Zom River. From there you had to travel 350 miles up the river by trade boat through the seemingly endless Zom jungle, to a small agriculture village called Get.

Get was situated on the edge of a dragon’s realm. You had to pass through the village and then trek 75 more miles into the jungle to get to the dragon lair valley and the Goddess Temple.

In the story line, the Village of Get was the birth place of the Dragon Riders order initiated by the Get Witch, Annindale. She became the first person in history to converse with a dragon, instead of trying to kill it.

The Village of Get has a lot of historical and foundational stories in it that precedes the initiation of Annindale’s dragon riders order and the building of the Goddess Temple itself.

If I built the diorama of the Get village next to the Zom river first, the river, the village fields and the houses would take up half of the 20 by 25 foot diorama floor space. That meant that I had already made enough trees and plants to fill in the jungle that surrounds the village.

With all the jungle parts that I needed, I could build the Get Village diorama in a few weeks. Then I could enjoy it while I spent another year of cutting and hot glueing more LEGO scale jungle parts together for the Dragon’s Lair Valley diorama. Ok then! Done and done. 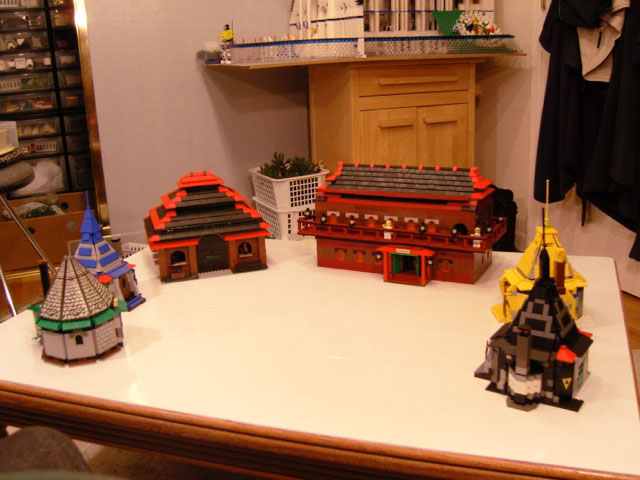 So I started building the village craft houses, farmers huts, a stable, an inn, a council house etc. Notice in the picture above, the poor homeless Goddess Temple sitting alone, dusty and abandoned in the corner of my LEGO room.  It will eventually get its home. 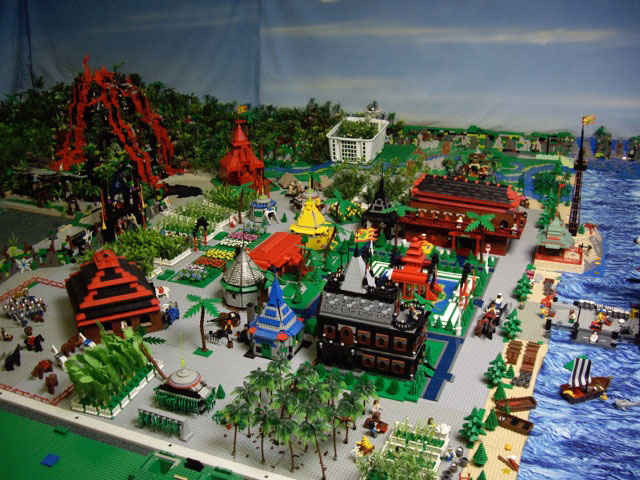 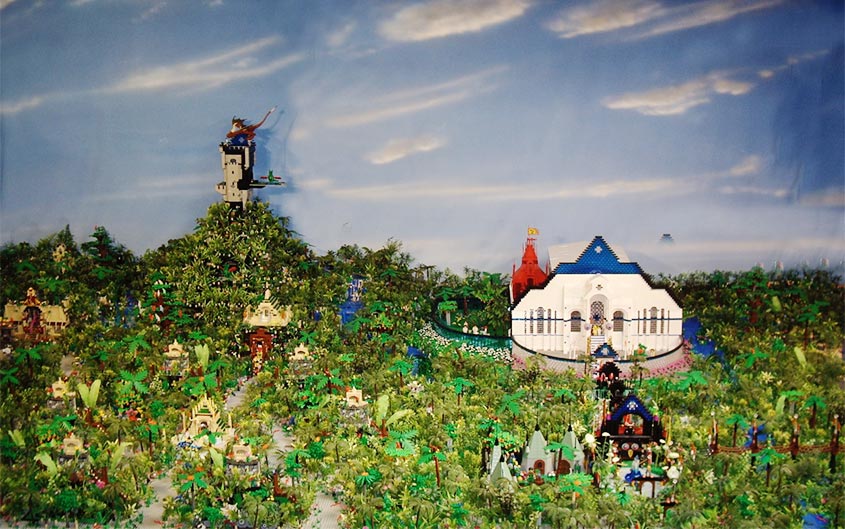 A year and a half later, with enough LEGO scale jungle completed, the Goddess Temple finally did get dusted off and found its home in the diorama.

All the detailed photos have been taken of the Dragon’s Lair Valley and I am currently working on the story lines connected to each of the diorama pictures. There is a lot more going on in that jungle than you can see from here.

The dragon’s lair valley diorama, including details of the Goddes Temple, should be on this website by spring.

Now all that is left to do is to build the Port Artune diorama … the story may never end! 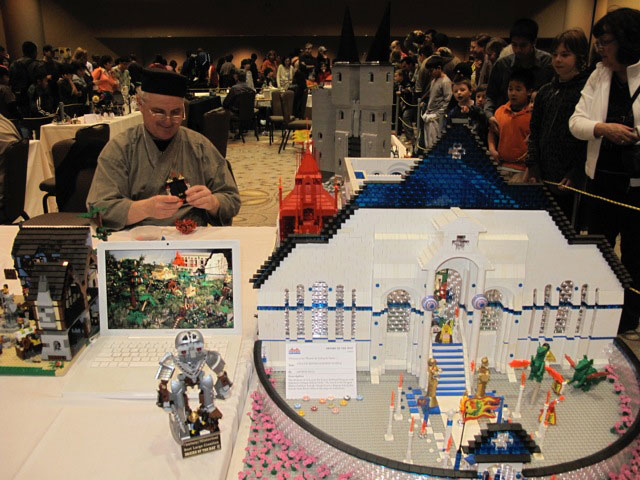 The Goddess Temple also took a trip to a national LEGO convention and won an award for “Best Large Creation” in the “Fantasy/Historical” category.

That is the trophy next to the Temple. The trophy is also sitting in front of a computer slide show of the Goddess Temple in its home in the dragon’s lair jungle valley.

I am proud to say that although most people at the convention were impressed with the Goddess Temple that they saw in front of them, they were blown away and “Gob Smacked” when they saw it in the context of the 20 foot by 25 foot jungle diorama in the slide show. I wish that I could have brought the whole diorama to the convention. I would have taken up nearly all the tables that you can see behind me in the picture above, and all the space in-between them.

Yes! I am a LEGO Maniac! 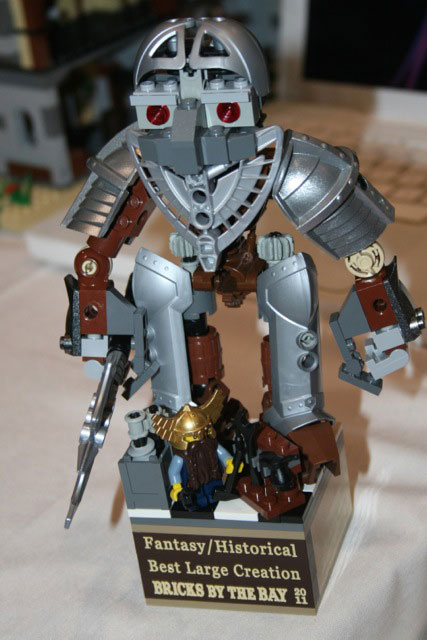 To show you how crazily obsessed adult LEGO Maniacs are, The LEGO Convention assigned their best LEGO builders to make different LEGO trophies for each category that would be judged in the show. Then they made a specific LEGO trophy that was presented to the person who was judged to have made the best LEGO trophy. 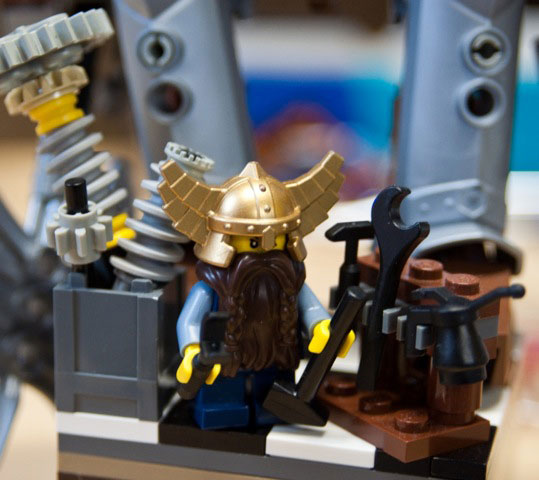 Not obsessed enough for you? How about this. The guy who built my trophy, built himself into the trophy as the dwarf trophy builder!

But now I am what they call, “A Prize Winning “LEGO Artist”

I don’t let it get to my head, Because If you translate the words “LEGO Artist” into normal laymen’s terminology, it would turn out to be – “LEGO Maniac” anyway.